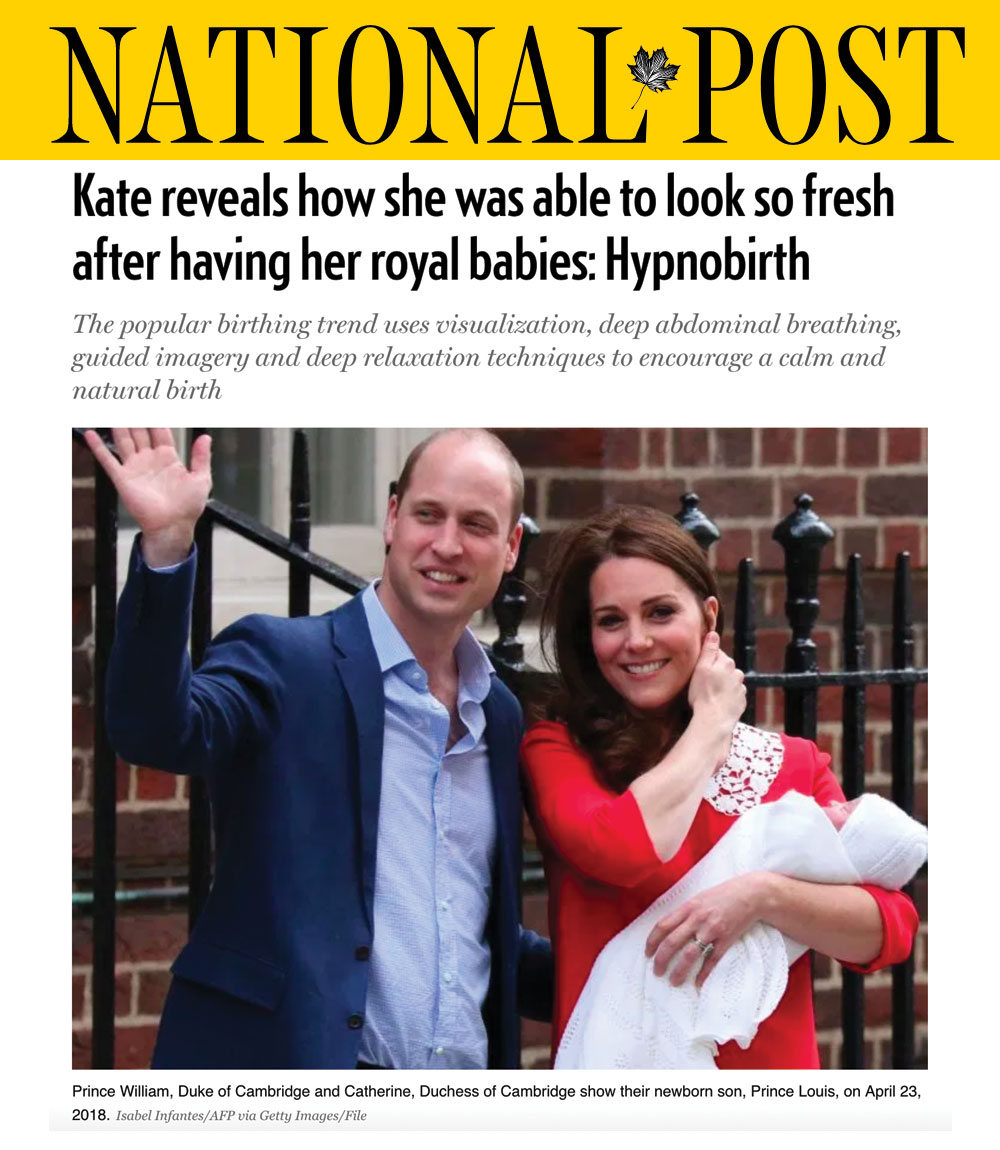 Kate Middleton confirmed the long-rumoured this past weekend, that she practised a form of self-hypnosis when she delivered her royal babies George, Charlotte and Louis.

“I saw the power of it,” the Duchess of Cambridge said of hypnobirthing during a podcast for Happy Mum, Happy Baby. The growing “mommy trend” was first described by Marie “Mickey” Mongan in her 1989 book, HypnoBirthing: A Celebration of Life, and is based on the tenet women birth instinctively and that labour need not be painful if the woman is properly prepared, relaxed and supported.

“I help them become aware of how magical that body is,” Mongan, who was inspired by Grantly Dick-Read, an 1890-born British obstetrician and leading advocate of natural birthing, said in an interview before her death last year at 86. “People have not been letting women feel magical and so that’s why they think they need drugs and they need all these other things.” Instead, all women need “is to relax and go inside and let their body do whatever it wants to do,” Mongan maintained.

For her part, the Duchess said she discovered hypnobirthing while struggling with hyperemesis gravidarum, a brutal form of morning sickness.

While stressing hypnobirthing isn’t for everyone, “it was through the hyperemesis that I really realized the power of the mind over the body,” Kate said.

“I’m not going to say that (Prince) William was standing there sort of, chanting sweet nothings at me. He definitely wasn’t. I didn’t even ask him about it, but it was just something I wanted to do for myself.”

“It was hugely powerful,” Kate said, adding she “quite liked labour,” primarily because she knew it was going to end.

The birthing method uses visualization, deep abdominal breathing (rather than the short, shallow breaths favoured by other childbirth methods), guided imagery and deep relaxation techniques (self-hypnosis) to encourage a calm and natural birth. “When women understand that pain is caused by constrictor hormones created by fear,” reads the HypnoBirthing Canada website, “they learn, instead, to release fear, thus creating endorphins — the feel good hormones.”

For $500 or so, the Mongan method is taught in group, or one-on-one private sessions, and is particularly appealing to women with tokophobia — a pathological terror of giving birth.

Proponents say hypnobirthing increases the chances for a drug-free and shorter labour, women are less likely to have a caesarean section or suffer post-natal depression and that hypnobirthed infants have higher Apgar scores, a test used to assess a newborn’s colour, heart rate, reflex, muscle tone and breathing.

Studies suggest most pregnant women would prefer birth not be interfered with unless medically necessary. However, one 2013 study of 2,400 American women’s childbirth experiences found 67 per cent received an epidural, 62 per cent an intravenous catheter, 47 per cent bladder catheters and 31 per cent the drug oxytocin to start or hurry up labour. “With such a large gap between the desired and the achieved, are we as providers and childbirth educators doing all that we can to help these women obtain their goal?” California midwife and nurse practitioner Corry Varner wrote in The Journal of Perinatal Education.

The Society of Obstetricians and Gynaecologists of Canada recommends non-drug  approaches to help women cope with the intensity of labour due to their “numerous” benefits, including a reduction in the need for C-sections. Among the approaches the society supports is the “Central Nervous System Control” mechanism, which consists of focusing the woman’s attention using relaxation, visualization and “auto-hypnosis.”

The evidence for hypnobirthing, however, is patchy.

A 2016 Cochrane review that included nine trials in which 2,954 women in total were randomized to hypnosis or control groups found women in the hypnosis group were 27 per cent less like to use pain-relieving drugs during labour. But there was no difference in the use of epidurals (a procedure that injects a local anaesthetic into the space around the spinal nerves in the lower back.) Women using hypnosis were also no more likely to have a normal vaginal birth and there were no clear differences in their sense of how well they coped with labour.

Another 2015 study published in BJOG: An International Journal of Obstetrics and Gynecology involving 680 women randomized to “usual care” or usual care plus brief self-hypnosis training found that attending two 90-minute hypnosis sessions at around 32 and 35 weeks’ gestation didn’t reduce epidural use but did reduce birth fear and anxiety.

It’s entirely possible longer courses of hypnosis training starting earlier in pregnancy might have had an impact, the authors acknowledged. And there was no evidence of extra risk for either mother or baby.

Another review published in 2011 in Clinical Psychology Review involving 13 studies found “hetero-hypnosis” (when one person hypnotizes another) and self-hypnosis “were consistently shown to be more effective than standard medical care, supportive care or childbirth education classes in reducing pain.”

Other researchers have found that women who use hypnotherapy during labour are also more likely to have consulted with an acupuncturist or naturopath, attend yoga or meditation classes during pregnancy and use herbal medicines, aromatherapy oils, homeopathy and other alternative therapies. According to a 2016 study of 2,445 Australian women, they were also “less commonly identified as feeling safer knowing that an obstetrician is providing their care and were more likely to labour in a birth centre or in a community centre (i.e. at home).”

Kate safely birthed all three of her babies in the exclusive private Lindo Wing of London’s St. Mary’s Hospital.

Diana, Princess of Wales, was also determined to have given birth without drugs — though some accounts suggest she had an epidural at a late stage of her 16-hour labour with Prince William.

During Prince Harry’s birth, she reportedly read a paperback novel until the last three hours and sucked on ice cubes.

Quebec hypnotherapist Ilona Fritsch, of HypnoBirthing Canada, offers classes in Montreal, Laval and Saint-Sauveur. The program consists of five, two-and-one-half hour classes over a period of five weeks. Women and couples are also urged to practise hypnobirthing meditations and affirmations daily until the baby’s birth.

“The reason we have pain is because we’re fearful and we tense up,” Fritsch said. “If we get rid of the fears and concerns about birth then there’s a good chance we won’t have any pain, that we’ll be comfortable during labour and have a faster birth.”

Critically, the program teaches the father or birth partner how to help the woman remain calm through the surges and protect her “bubble of positivity,” according to the Mongan method’s teaching.

While the goal is a natural, drug-free birth, “I tell women, ‘if you feel that you need an epidural at one point, it’s not a failure, it’s OK. Don’t think that everything is going to be bad just because you took the epidural,’” Fritsch said.

Women don’t go into a trace. There’s no swinging watch. Rather, according to the official HypnoBirthing Institute website, the experience is similar to daydreaming, or the “focusing that occurs” when one is engrossed in a good book, or a movie.

While women might feel “some discomfort,” it’s not pain, as such, Fritsch said. “If you ask them while they are in labour, they say, ‘I feel sensations. I feel tension in my belly.’ But they never call it pain.”

Still, childbirth is a major physical and physiological event, and critics wrestle with the idea that hypnobirthing is “the secret” behind how Kate “was able to look so fresh” after her royal baby births. Some see it as just another celebrity-endorsed, hippie birth fad (Gisele Bundchen and Jessica Alba are among the enthusiasts) that subtly chips away at women’s trust in mainstream medicine.

“When women are told they can get through what may be the most traumatic physical experience of their life just by thinking more positively about it, it can prompt those who need extra help — from the 60 per cent taking drugs for pain relief, to the small number who require an emergency caesarean — feel as if they failed in some way, even though the medical help they receive is based on decades of research into making pregnancy and birth safer,” Hannah Fearn wrote in The Independent.

Original article written by Sharon Kirkey can be viewed here .