Marie Mongan, Who Developed Hypnotherapy for Childbirth, Dies at 86

Marie Mongan, Who Developed Hypnotherapy for Childbirth, Dies at 86 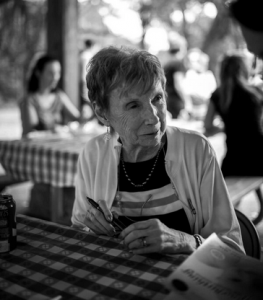 Her natural childbirth techniques have been used by Kate Middleton, Jessica Alba and manyother women around the world in search of a more gentle, unmedicated experience.

When Marie Mongan was pregnant with her third child in the 1950s, she made an unusualdemand. She told her doctor that when it was time for her to give birth, she didn’t wantanesthesia — and if he didn’t agree to her terms, she would find someone who did.She had declined anesthesia during her first two pregnancies, too, but in each case thenurses had not listened. They held down her wrists with leather straps and forced an ethercone onto her face.After her second child was born “the same sad way,” Ms. Mongan said, she vowed, “Neveragain!”Ms. Mongan had spent years preparing for an unmedicated birth. During her firstpregnancy, she devoured the works of Grantly Dick-Read, a British obstetrician whopopularized the phrase “natural childbirth” and espoused relaxation to lessen pain. Afterstudying his book “Childbirth Without Fear,” she learned how to bring herself to a state ofdeep relaxation.She finally experienced an unmedicated labor and delivery in 1959, when she had her thirdchild, Maura; it was, she said, “the most beautiful birth that I could have imagined.” Shedelivered her fourth child the same way, and it was just as “spectacular,” she said.Ms. Mongan, having been a longtime educator in New Hampshire, went on to become acertified hypnotherapist. But it wasn’t until 1989, when Maura became pregnant, that Ms.Mongan started holding classes in hypnobirthing, a series of techniques using hypnosis,positive affirmations, visualizations and meditation to ease the pain of childbirth naturally.“I think this was her gateway,” her daughter, now married as Maura Geddes, said in a phoneinterview.

The Mongan method, first taught to Ms. Geddes and a few other couples, began spreadingby word of mouth in the early 1990s. Although hypnosis had been used in obstetrics for morethan a century, it had not been widely studied as a tool for childbirth. Ms. Mongan soonbegan receiving requests to train not only parents but also nurses, doulas andhypnotherapists. A subsequent book, national press and, eventually, Ms. Mongan’s owninstitute helped hypnobirthing gain popularity around the world, and her methods wereused and endorsed by celebrities like Kate Middleton and Jessica Alba.Ms. Mongan was 86 when she died on June 17, 2019, at her daughter’s home in Bow, N.H. Herdeath was not widely reported at the time, but it gained wider attention when it wasreported by The Washington Post last month. Ms. Geddes said the cause was complicationsof Sjogren’s syndrome, an autoimmune disease.Growing up, Ms. Mongan often heard about her own birth from her mother, who woulddescribe the labor and delivery as so traumatic that she believed that it had causedpermanent damage to her body.“I felt tremendous guilt during my growing up years,” Ms. Mongan wrote in the fourthedition of her book, “HypnoBirthing: The Mongan Method,” originally published in 1992.When Ms. Geddes became pregnant, Ms. Mongan — who had by then become certified inhypnotherapy — guided her daughter through a tranquil birth experience, complete withwhat she called “rainbow relaxation” music.“The nurses were coming in and saying, ʻI can’t believe how calm she is,’” Ms. Geddesrecalled. She had a boy, Kyle.Mothers who are guided by hypnobirthing are “breathing their babies down to crowning indeep relaxation,” Ms. Mongan wrote, in contrast to the pant-pant-blow breathing rhythmscharacteristic of early iterations of the Lamaze method, which became popular in the 1960s.Hypnosis does not put women in a trance or make them fall asleep, Ms. Mongan told TheWashington Times in 2000. “It is similar to the daydreaming or focusing that occurs whenyou are engrossed in a book or staring at the fire — you lose track of what is going on aroundyou,” she said. “You can be fully relaxed yet fully in control.”She added, “In birthing, when the mind accepts the belief that without complication, birthingproceeds naturally, no pain exists and no pain is experienced.”In 1999, about a decade after Kyle’s birth, the NBC News program “Dateline” ran a segmentabout an OB-GYN in Florida who used hypnosis on his patients, introducing it to viewers asa “remarkable technique” that some say “can make labor easy — even fun!” Ms. Mongan
was not mentioned in the broadcast, but she was in an accompanying online article thatcarried a link to her website.Afterward, she said, she received almost 5,000 calls and emails. The Boston Globe reportedthat her book, “flew out of stock” in nine weeks.


In her book, “HypnoBirthing: The Mongan Method,”Ms. Mongan said the birth of her third child usingher relaxation techniques was “the most beautifulbirth that I could have imagined.”

Marie Madeline Flanagan, who went by Mickey, was born in San Diego on Feb. 1, 1933, toMarie and Patrick Flanagan. Her mother was a seamstress, and her father was a Navy chiefpetty officer who became a foreman at a fabric mill after the family moved to Franklin, N.H.Mickey married her high school sweetheart, Gerald Bilodeau, in 1954 and graduated fromwhat is now Plymouth State University in New Hampshire. She then taught English at thehigh school she had attended.The couple divorced in 1966. In 1970 she married Eugene Mongan, who died in 2013. Inaddition to Ms. Geddes, Ms. Mongan is survived by her three other children, WayneFlanagan, Brian Kelly and Shawn Mongan; three stepchildren, Michelle Shoemaker, SteveMongan and Nancy Kelley; 17 grandchildren; and four great-grandchildren.Before her name became associated with hypnobirthing, Ms. Mongan had been dean ofPierce College for Women in Concord, N.H., appointed in 1965. It closed in 1972. Six yearsshe later received a master’s degree in education from Plymouth State. In Concord sheopened the Thomas Secretarial School, which is no longer in existence.

Her hypnobirthing classes led her to create the HypnoBirthing Institute, nowHypnoBirthing International, based in Pembroke, N.H., of which Ms. Geddes is the chiefexecutive. The organization has trained and certified doctors, doulas, midwives andlaypeople to become hypnobirth educators in 46 countries, said Vivian Keeler, a chiropractorand doula who is the president of HypnoBirthing International.Despite the popularity of hypnobirthing, in 2016 the Cochrane Collaboration, a well-regardednetwork of independent researchers, reviewed nine clinical trials involving nearly 3,000women and found that there was not enough evidence to determine with certainty whetherhypnosis helps women feel less pain during labor, or whether it helps them better cope withlabor.But a clinical trial published in 2015 in BJOG, an international peer-reviewed journal ofobstetrics and gynecology, showed that hypnobirthing can help women feel less afraid andanxious during labor than they might have been.The participants “had started off as being skeptical, but they ended up being really positiveabout the technique, as did their partners,” Dr. Soo Downe one of the study’s authors and aprofessor in midwifery studies at the University of Central Lancashire in England, told TheNew York Times in 2019.Ms. Mongan’s grandson Kyle Geddes, now 31, recalled having been hypnotized by hisgrandmother when he was younger and needed help falling asleep. He and his wife are nowexpecting their first child and have been attending hypnobirthing classes.Hypnosis training even helped Ms. Mongan when she fell ill several times in her last yearsand at one point needed open-heart surgery, Mr. Geddes said.In her last months, even after losing eyesight, she continued to work on a new book abouthypnobirthing, dictating her thoughts to her secretary.“She was really good at putting her mind to something and seeing it through,” said Ms.Keeler, the president of HypnoBirthing International. “One thing I said to her was, ʻYou lostyour eyesight, but you never lost your vision.’”

Alain Delaquérière contributed research.Christina Caron is a parenting reporter. Before joining The Times in 2014, she spent a decade editing and writing for broadcast news and also worked as a clinical research coordinator at the Dana-Farber Cancer Institute.